To my new friends: the French Teachers of America—Muchas Gracias!

Thank God for teachers and the French.
I had two sentences in French in my soon to be bestseller and wanted to make sure they were grammatically correct (I don’t speak French, so I used a computer translation program off the internet). I called up Berlitz; I figured they would be happy to help since I had taken a Spanish class there.

“Hi,” I said in what I thought was a cheerful voice. “I wrote a novel and have two sentences in French that I would like to make sure are correct. Would it be possible for me to get in touch with one of your French-speaking teachers? It would only take a minute or two.”

“There is no French teacher here,” the lady­—and I say that generously—said to me in a huffy tone.

“I’m sorry, I thought you would have some French teachers.”

“I don’t need to speak to anyone right away. I could email the person.”

“I’ll leave a message,” she said, and took my name and number. And that was the last I heard from Berlitz.

Screw em. Pimsleur Language is cheaper and comes on CDs.

Next up was Wheaton College. Billy Graham’s alma mater.  The receptionist was very friendly and connected me to the foreign languages department. The call went to voicemail. I couldn’t catch the woman’s name, but she sounded very nice: “Leave a message and I will get back to you. And have a very blessed day.”

Have a very blessed, day. Well, that certainly buoyed my hopes. I left a message with my name and number, and went to my local Starbucks feeling pretty, pretty good.

The Lord works in mysterious ways: Apparently God’s present-day disciple at Wheaton College’s foreign languages department had been a bit sarcastic when telling callers to have a “blessed day.” Excuse me, a “very blessed day.” I should have spoken in tongues when leaving my message. A gossodom ganu orangatanga boob alou shebang dinga dang a roo too doobah.
Or something to that effect.

Somehow I don’t think that would have worked either.

But thankfully, I found the “American Association of Teachers of French” and sent an email to their staff. Within ten minutes I received a reply that my email had been forwarded to the Director.

The Director—pretty, pretty important. In fact, on the organizational chart there is no one higher. And get this: exactly fifteen minutes later I received a reply. Now I have my French translation solved. Thank you, “American Association of Teachers of French.” Oh, and if you have a beef about teachers or the French, take it somewhere else. You won’t hear any complaints from me.

And one other thing: Have a blessed day.

Posted by Unknown at 8:02 PM No comments:

The Floating Man: one author's Saga of getting a novel out to the world—Day 1

It’s been over a year now.  Four drafts and endless edits. The part I hate. Guess that is why I have been procrastinating and drinking too much. Switched from Whisky Sours to Margaritas. . . . A step forward?
My novel, The Floating Man, is ready to be formatted; that is what I thought, anyway. Before putting your work into a digital format you need to establish a presence in the social media universe. This blog is my first step, and it’s free! I’m already on Facebook under my nickname (need to add a new site with my real name). Next it’s Twitter: I thought that was just for groupies; my bad. And you might consider your own website (maybe later).
Now that that is done it’s on to the copyright office (easy, just go online and download a pdf copy). Cover photo-check. And most important a summary page and author’s bio as this is what promotes your book. Check out http://queryshark.blogspot.com/ for examples and help; I did, after I already wrote mine.
But if you are serious about writing, you can avoid some of the landmines that dot the landscape. Think of me as your minesweeper: I’ll get blown up so that you may survive unscathed; well, nobody survives completely unscathed. My last step (I think) is to do an acknowledgment’s page. Must not forget the wife. Dear God, please don’t let me forget. Actually, I jest (no, I’m not going to forget her) she is the one that allowed me the freedom to write unimpeded from the outside world. And she believes in me. One of the many things I love about her. She’s a good woman. Honey, I love you.
Okay. I think I covered that base. See how easy that was? Good tip for you men out there.
Now, forgive me for a brief promotion. Below is my summary/author bio for my new novel; The Floating Man.
An amazing scientific discovery in 1830 leads to a government cover-up spanning two centuries and two continents, leaving a trail of death and destruction in its wake. Replete with dark psychosexual overtones, the Floating Man is a mystery thriller that takes place in both past and present as fictional and historical characters collide.
When ‘burned out’ investigative reporter John Hill returns home to take over the Beaufort Sentinel from his friend and mentor, James Campbell, he finds that his friend has literally fallen onto the story of a lifetime. The headline from 1830 screams out at them: Floating Man from France to perform Aerial Stunts this Saturday.
Who was Henri Richaud? An early hot air balloonist . . . or something else? How did he end up on a plantation run by Harriott Pinckney Horry, one of South Carolina’s most famous women?  As John and James begin their search for this mysterious friend of Napoleon and protégé of Pierre-Simon Laplace—one of the greatest scientists of all time—they find that virtually all historical references to him have been deleted.
John and James soon enlist the help of John’s former investigative partner, Sheila Jefferson, now a staffer on the National Security Council. Big mistake. While romance ensues, alarm bells go off in a deeply imbedded rogue cell of America’s labyrinthine intelligence apparatus. They soon find out that their search for Henri Richaud and the memoirs of the Sentinel’s founder, Robert Campbell, has deadly consequences. For Sheila, an erotic obsession turns violent as agents from the “Program” are dispatched to keep tabs on our trio.
Join John, James, and Sheila, along with a cast of historical characters that includes Napoleon, Andrew Jackson, Chief John Ross of the Cherokee Nation and Harriott Pinckney Horry and the slaves of Hampton Plantation as they try to stay one step ahead of their pursuers in both the past and present.

A graduate of Northwestern, William Crawford began telling stories at the age of five to his cousins late at night while on family vacations in the Great North Woods.  This quickly progressed—if you can call two decades quickly progressing—to political satire.  In 1996 the author created a parody on the OJ Simpson saga; My Search for the Real Killer, not by OJ Simpson became a minor cult classic. The author’s real ambition was to become a novelist. Over the years he developed several storylines. Once he retired from his safety position in government he turned that ambition into reality. The result is the Floating Man, a mystery thriller that takes place in the past and present replete with psychosexual overtones and historical figures and events that are woven into a story of love, discovery, ambition, greed, death, and redemption.

You can contact the author at: authorwilliamcrawford@gmail.com
Posted by Unknown at 2:17 PM No comments:

Go to the website for the latest news on The Floating Man.

Now Available as an eBook at Amazon, B&N and Smashwords 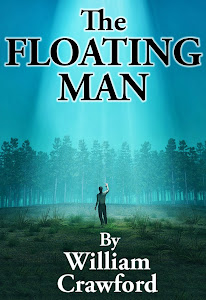 An amazing scientific discovery in 1830 leads to a government cover-up spanning two centuries and two continents; a trail of death and destruction follows in its wake.

A graduate of Northwestern, William Crawford began telling stories at the age of five to his cousins late at night while on family vacations in the Great North Woods.
This quickly progressed—if you can call two decades quickly progressing— to political satire.
In 1996 the author created a parody on the OJ Simpson saga. My Search for the Real Killer, not by OJ Simpson, became a minor cult classic.
The author’s real ambition was to become a novelist. Over the years he developed several storylines. Once he retired from his safety position in government he turned that ambition into reality.
The result is the Floating Man: A mystery thriller replete with psychosexual overtones that takes place in the past and present. Historical figures collide with fictional characters in a story of love, discovery, ambition, greed, death, and redemption.